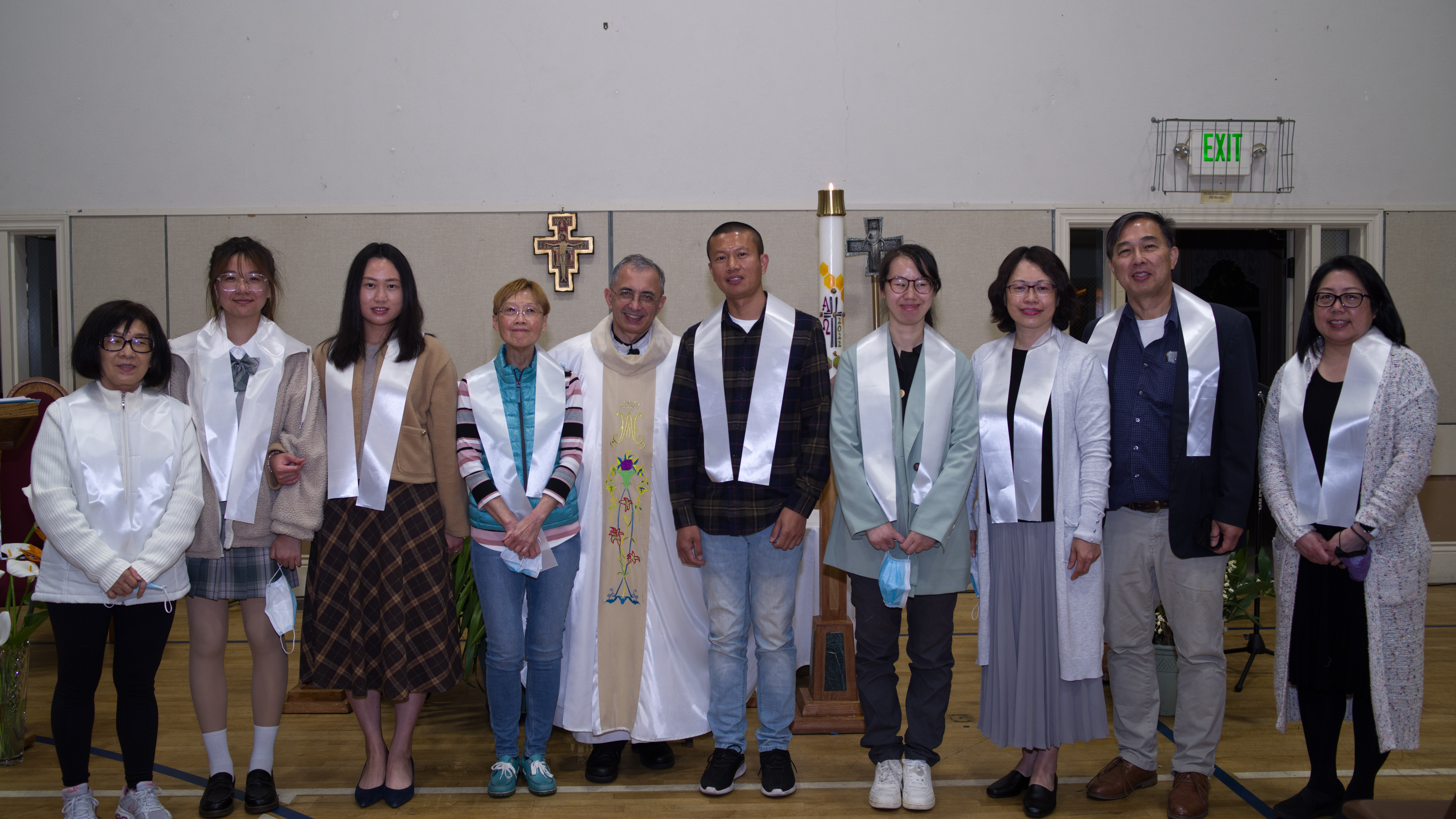 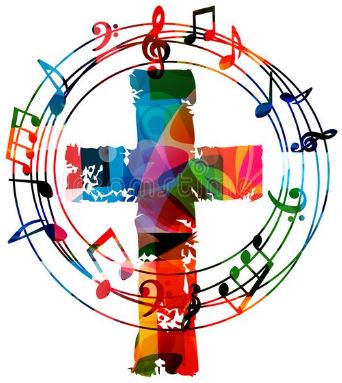 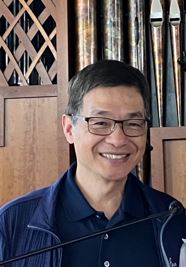 記得1991年參加活力運動時，狄剛總主教講了一句話很打動我：「很多事都有著天主上智的照顧」。我很喜歡〝上智的照顧〞這話, 感覺這比「事事皆有天主安排」的說法更積極些。換言之，常懷祈禱之心，盡力做好手邊本份工作，全心信賴天父。一如耶穌會的名言 “Work as if success depends on your own efforts, but trust as if all depend on God.” 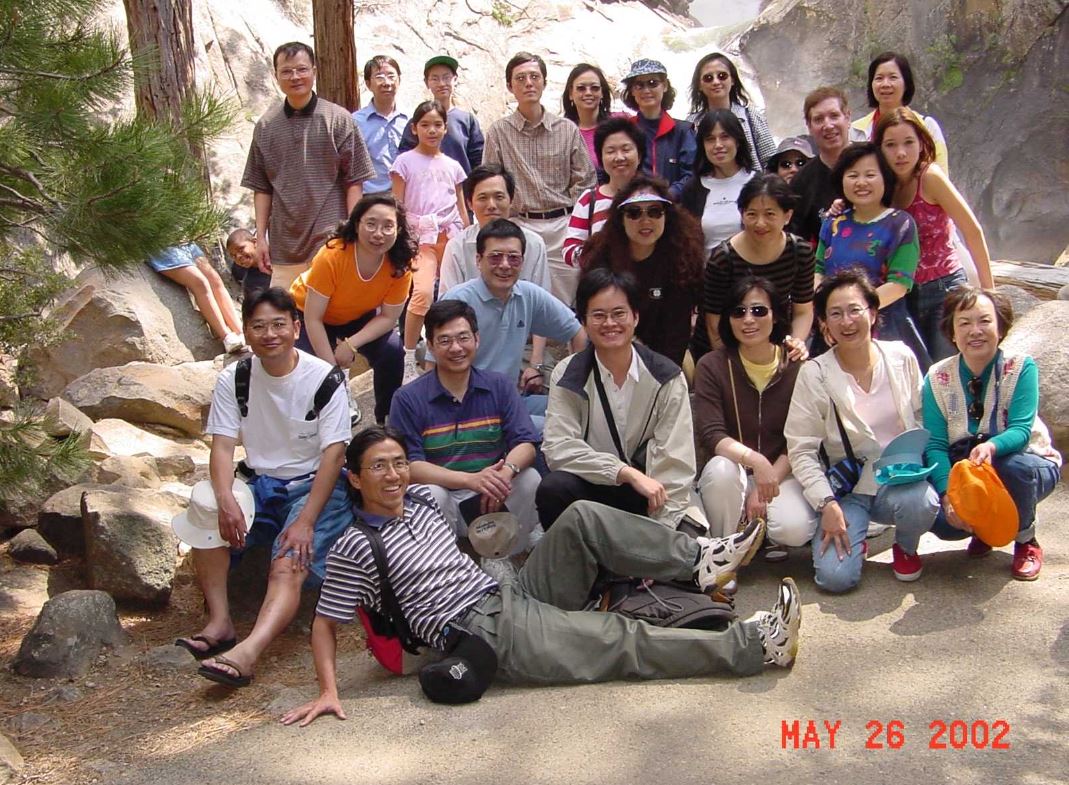 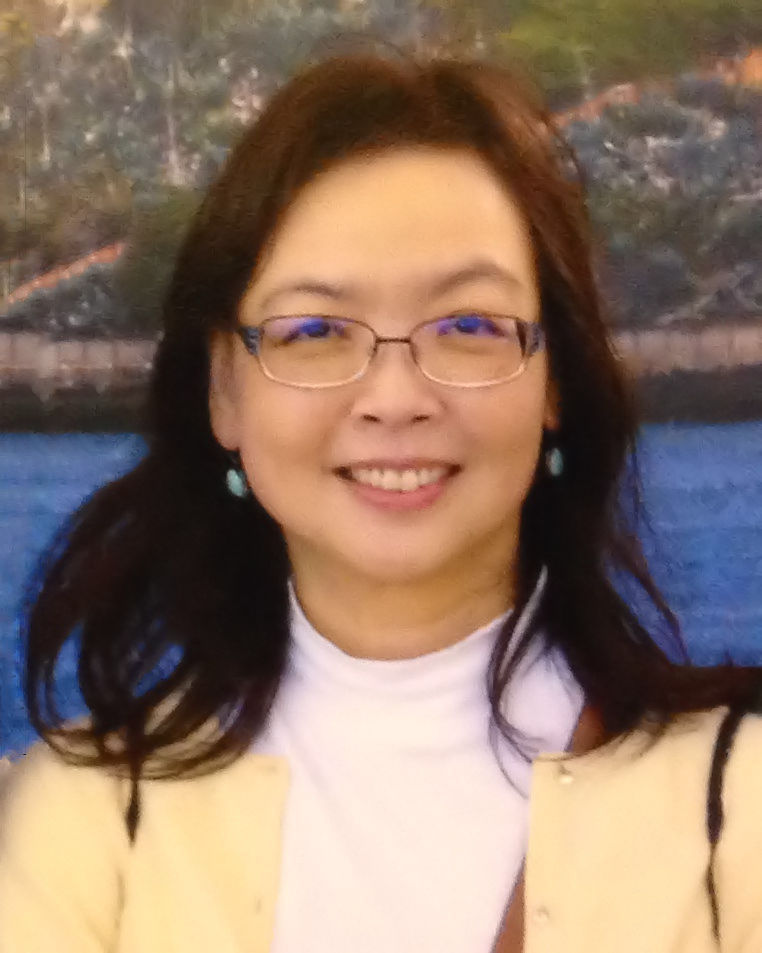 Rosemary and Chris’s Sharing After Visiting the Pope

Chris and I returned from our Honeymoon to Rome in December, luckily before the major Omicron breakout! We wanted to share a few photos and the story of our pilgrimage to visit Papa Francisco.

Before Chris even proposed to me all the way back in 2019, I already researched how to receive tickets for the Sposi Novelli audience because I was trying to convince Aaron and Connie (my brother & sister-in-law) to go as newlyweds. From there, I got in touch with the sisters at the Pontifical University in Rome, and that’s how I was able to reserve tickets for December of 2021 after Chris and I got engaged.

I had a bit of experience traveling to Rome for the Pope’s General Audience, because my mom (Margarita) took me and my brother to visit St. John Paul II in the year 2000 for the Jubilee Pilgrimage. At that time, the crowd was so packed that my mom actually put leashes on my brother and my wrists to keep track of us! I was only 8 years old at the time.

So, as I started planning our visit with Pope Francis, I made a plan with Chris to wake up at 4am and stand in-line at St. Peter’s Basilica by 5:30, no later than 6am. Of course, Chris didn’t think twice about my plan (although he may have thought I was crazy inside his head) and we stuck to the plan!

I thought the crowds and security lines would be just as I remembered… and I was definitely 100% mistaken 😂. The crowds were very small as it was freezing cold, and of course, because of COVID restrictions requiring strict testing protocols. We waited outside until around 7:30am when the guards let us in, and we proceeded to sit in the first chair, in the first row, right in front of Pope Francis as he gave his general lecture.

After the audience, he visited with nearly 40 – 45 people before coming over to the Sposi Novelli line. When he came to see us, I had my talking points written in bullet points, and started speaking to him. He was so shocked to hear me speaking Spanish, that he kept responding to Chris in Spanish and I had to say: “he doesn’t understand what you’re saying, I can speak Spanish but he can’t!” and he kept saying to Chris “but she’s Chinese! I was expecting her to speak Chinese. She’s pretty good!” hahaha

That is the moment captured in the photos below.

After that exchange where he was laughing with us, he gave us a short blessing, and had to move on. I was a bit sad because I realized the bulk of our exchange was him laughing and being shocked at my ability to speak Spanish. I thought we would have a more profound talk, but we ran out of time so quickly!

Afterwards, Rome Reports did an TV interview with us (article & video here) and we walked away feeling incredibly blessed to be able to share our story more broadly.

Reflecting back on our brief exchange with Pope Francis, I think we were incredibly lucky to have had a meaningful (albeit brief) exchange. We were the only couple that Pope Francis actually spoke with, and it was a deeply human, funny, shocking, and meaningful interaction. We feel so blessed to have been in his presence and received a blessing from him!

Hope this story brought a smile to your day,
Rosemary & Chris 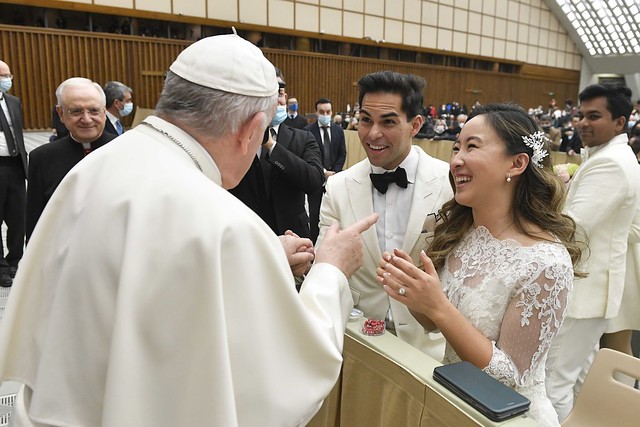 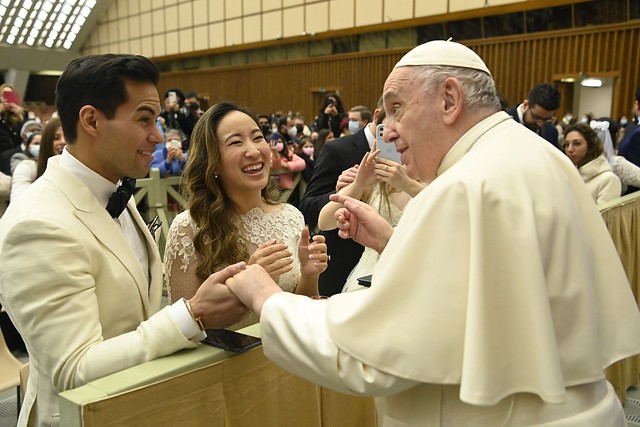 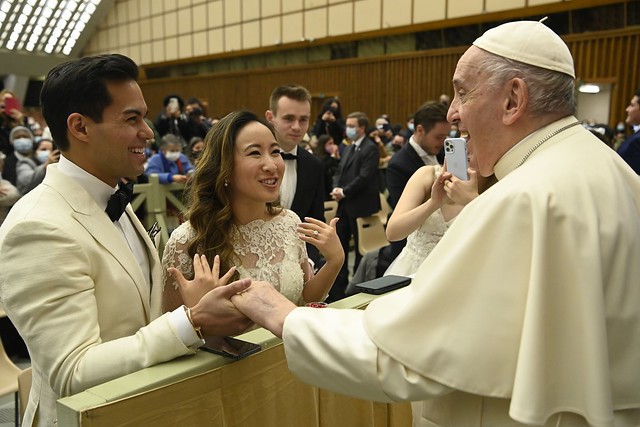 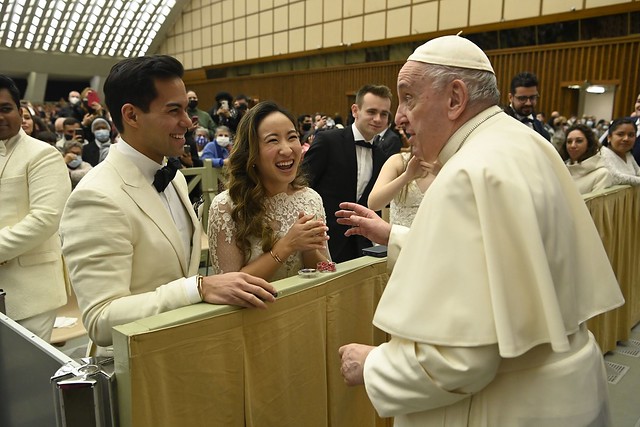 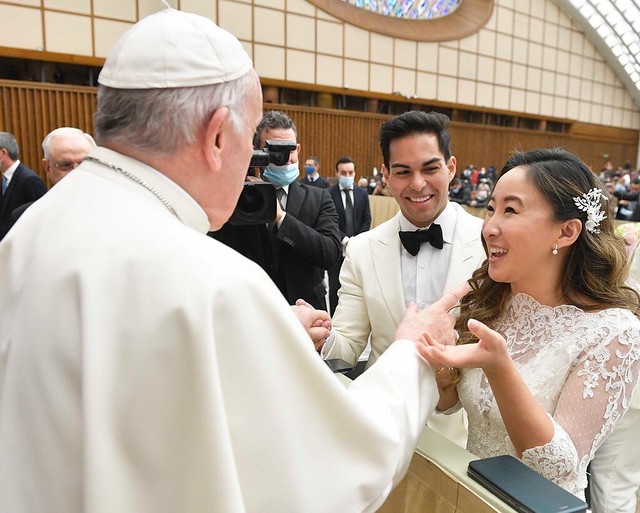 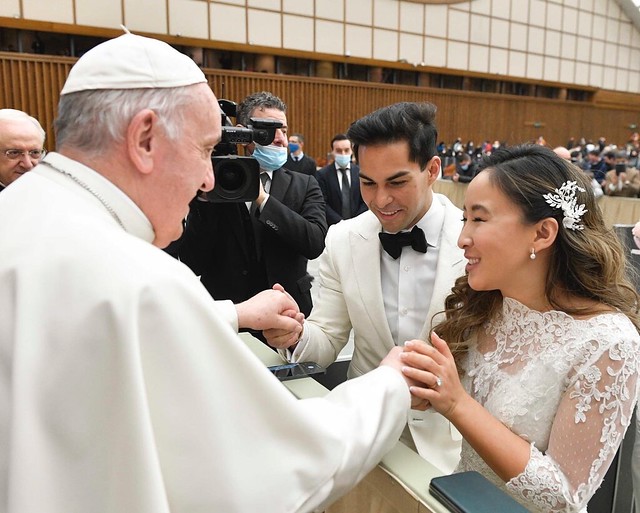 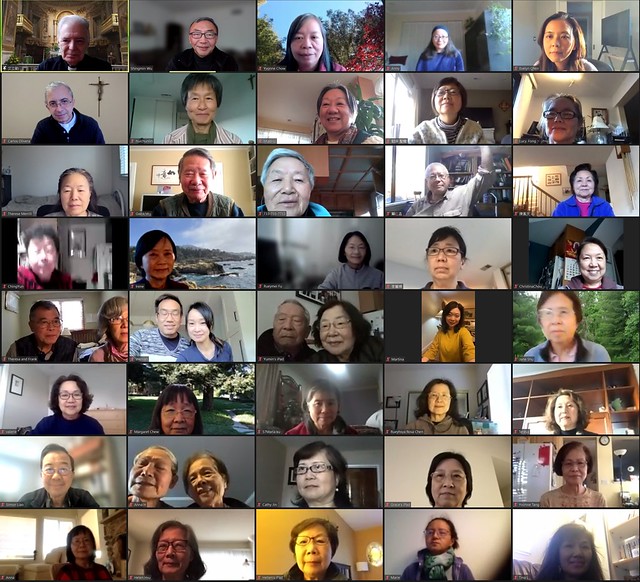 (Powerpoint might take a moment to load up. Thanks for being patient.) 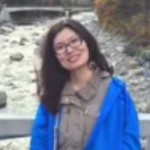 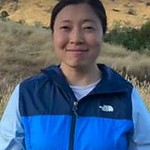 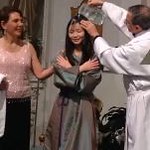